How To Forget Someone
the power of hypnosis

Hypnosis -- with or without a therapist -- can solve your desire to forget someone.

Only when it becomes clear your attachment to a particular peson is futile will you turn to face two tough questions:

"Why did I allow myself to become addicted?" and, "How can I forget about him [or her]?"

The first question requires psychotherapy, or a blunt friend with great insight. The second can be resolved with hypnotherapy.

The hypnotherapeutic technique basically involves you seeing the dumper as a "zero", a non-person. Coupled with post-hypnotic suggestions about you being strong on your own, self-sufficient, and so on, this approach rids your mind of the emotional pain and obsessive needs you have associated with the dumper.

Hypnotherapy can help change the repetitive thoughts which otherwise strengthen your dependency.

Like Brenda, who had thoroughly convinced herself that "no decent guy would look at me twice". So Brenda settled for Garth, a married man who made lots of promises but seemed to find time only for sex.

Brenda worshipped Garth. Her women friends told Brenda to stop deceiving herself about Garth's intentions. But Brenda would not listen.

She remained steadfastly faithful to Garth, thus cutting off any possibility of meeting a man who might be available. Only after Garth dumped her for a younger mistress did Brenda seek professional help.

With guidance from a hypnotherapist Brenda gradually came to see the truth about how she had shortchanged herself. Her low self-esteem had led her to believe she was unworthy of the love of a man she could fully respect. Brenda had lived with the fear of rejection since childhood when her parents either ignored her or punished her mercilessly for minor infractions of the family code. She grew up feeling undeserving but with an insatiable need to be the centre of attention.

These beliefs were perpetuated by her devotion to Garth, by the positive things she told herself about him, while she ignored his negative behaviours and continued to unfairly berate herself for her imagined shortcomings.

But the more Brenda developed her own identity the less she needed to lean on Garth, or anyone else.

And the more self-reliant, the more attractive Brenda became to men who were looking for an intelligent female companion.

At the close of a series of hypnotherapy sessions, Brenda had become her own best friend, had shed the self-concepts of unworthiness and despair.

She is now vibrant, and eager to meet a man as an equal, not as a dependent.

Parallel to her sessions with the hypnotherapist Brenda used Thought-Stopping whenever she caught herself thinking "Oy, Garth used to . . ." or "[sigh] Garth liked to . . ."

Brenda also helped herself with EFT to forget Garth. She zeroed in on the emotional ties such as "Even though I'm sad to miss the smell of Garth's after-shave, I choose to deeply and completely accept myself."

Yet another self-help technique that Brenda enjoyed was the Mirror Technique. She would gaze at her own eyes in a mirror and say out loud positive comments such as "you are intelligent, beautiful and as worthwhile as anyone else." 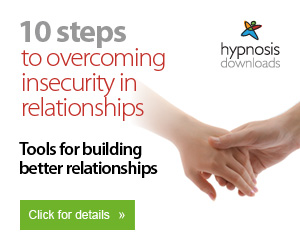 And if you do choose to enjoy one of our self-help audios click in the blue box to choose the best hypnotic self-help solutions for YOU:

More than 1200 hypnotic solutions in powerful, yet inexpensive, MP3, CD, or DVD formats.